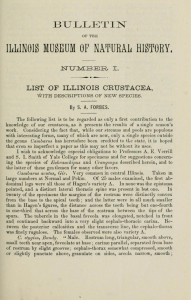 Some of our oldest specimens were collected in the late 1800’s by Stephen A. Forbes. They formed the basis for the first article to appear in the Survey’s Bulletin “List of Illinois Crustacea.” More specimens were collected during the first half of the 1900’s in conjunction with the insect surveys organized by Herbert H. Ross. A large part of the collection comes from specimens collected from 1972 to 1982 for Lawrence M. Page’s “The Crayfishes and Shrimps (Decapoda) of Illinois” published in 1985.  Since that time, significant collections have been made documenting the spread of invasive crayfishes in Illinois and surveying the states of Missouri, Kentucky and Alabama.  We’ve also recently acquired statewide collections of Missouri and Nebraska crayfishes.